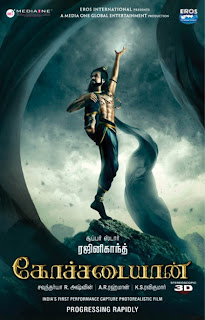 Kochadaiyaan, Soundarya Rajinikanth’s mega budget film has been the talk of the town since its initiation. Beginning with the long line of prominent actors in its cast followed by the rift between the two sisters Soundarya and Aishwarya over release dates, Rajinikanth’s health and finally now the poster.The poster shows Rajinikanth portraying one of Lord Shiva’s poses. He sports long hair and a beard along with accessories on his hair, neck and leg. While the physique looks like the work of a ‘mouse’ we are sure Rajini’s fans will be over-thrilled to see the actor in the new avatar.

In the film however, Rajini plays an eighth century Pandya king who is known for his legendary valour. Soundarya released the first look of the film on Twitter. The music of the film is created by AR Rahman while KS Ravikumar will handle the microphone. Besides Rajinikanth the other stars in the movie include Katrina Kaif, Shobhana, Jackie Shroff, Prithviraj, Sarathkumar and more. While we eagerly wait for the film to hit the screens, tell us what you think about the poster.

Email ThisBlogThis!Share to TwitterShare to FacebookShare to Pinterest
Labels: Kochadaiyaan